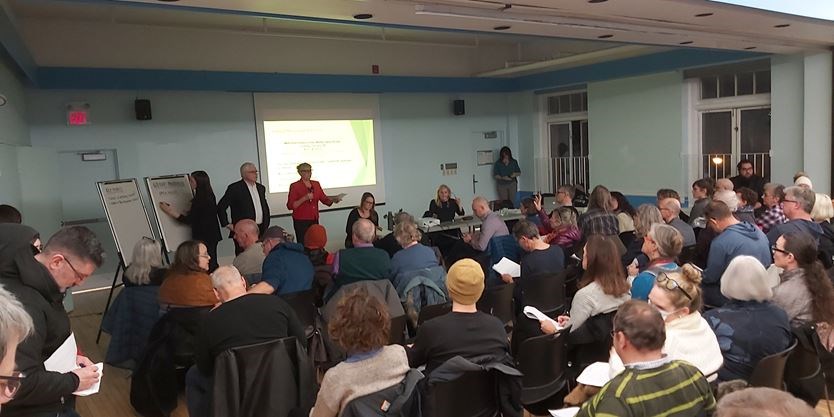 Residents in Leslieville gathered at the Ralph Thornton Community Centre Jan. 15 to organize a campaign to keep the Ontario Line underground between Gerrard Street East and Eastern Avenue. – David Nickle/Torstar

A group of Leslieville residents and local politicians met publicly for the first time Jan. 15, to organize a grassroots campaign to see that the Ontario Line is tunnelled underground and not built on the surface for two kilometres, through the neighbourhoods between Eastern Avenue and Gerrard Street East.

The 2K Corridor Community Action Group, as it’s been named, is planning to make a big impression on Metrolinx — the provincial agency that will be building the line that stretches from Ontario Place to the Ontario Science Centre.

Specifically, the Jan. 15 meeting at the Ralph Thornton Community Centre was to organize residents to attend community open houses hosted by Metrolinx to raise concerns about the safety of above-ground rail.

But organizers made clear that while they object to running the rail above-ground — alongside heavy rail for the parallel Regional Express Rail lines (RER) and existing rail lines — they are not opposing public transit in the area.

“We are absolutely not trying to stop the project,” said 2K Corridor Community Action Group spokesperson Darcie Garand. “We are very pro-transit. We are all transit users, and we need this project. The biggest focus for us is getting the project put underground from Eastern to Gerrard — based on safety, health, numerous issues it’s going to cause.”

Tabuns and Fletcher spoke at the meeting — urging the approximately 150 community members who attended to make their voices heard at community open houses and join various subcommittees to find ways to make the community’s voice heard. Because the project is entirely under the control of the provincially-controlled agency Metrolinx, there is little the City of Toronto can do to alter the plans for the line.

Ontario Premier Doug Ford announced the $11-billion line as a replacement for Toronto’s planned downtown relief line, which was to link downtown Toronto with Line 2, so commuters could bypass the increasingly congested Line 1.

The 15.5-kilometre underground line emerges between Gerrard and Eastern, to avoid the expense and engineering challenges of tunnelling under the Don River.

Residents at the meeting expressed concerns that the line — which would parallel existing rail lines along with the new RER lines — would double the width of the rail corridor from three tracks to six, and subject the neighbourhood to much more frequent rail traffic.

The first community open house is Jan. 28 at the Metropolitan Community Church of Toronto at 115 Simpson Avenue.